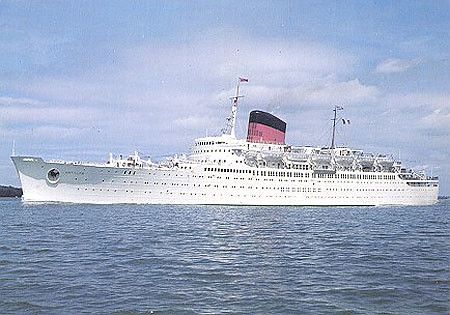 We traveled on the French Line’s S.S. Antilles from Barbados to La Guaira, the port for Caracas, Venezuela, in 1963.

Built for the French Line, Antilles was a near-sister to SS Flandre of 1952. Her construction was completed and her maiden voyage made in 1953. She differed from her sister mainly because she was painted white. She was placed on West Indies cruise service in the 1960s.

Her career was much shorter than that of her sister′s. On 8 January 1971, she struck a reef near the island of Mustique in the Grenadines while attempting to navigate Lansecoy Bay, a shallow and reef-filled bay on the northern side of Mustique. Why Antilles′ captain decided to sail into the narrow, shallow strait is still not known. But on hitting the rocks the impact ruptured a fuel tank and she caught fire. All of her passengers and crew evacuated the ship safely to the island of Mustique and they were rescued by the Cunard Line′s Queen Elizabeth 2.

The burnt-out hulk could not be freed from the reef, so the ship lay there for several months, eventually breaking in half. Many years later she would be partially scrapped on the spot and moved just a few hundred yards to her final resting place in the channel off Lansecoy Bay.

The wreck site is submerged off Mustique and is barely visible on Google Earth at 12°54′04″N 061°10′44″W; the mast protrudes from the water during low tide. Although the ship wrecked on a reef, reaching the site is dangerous because of the rip tides that form in the area.