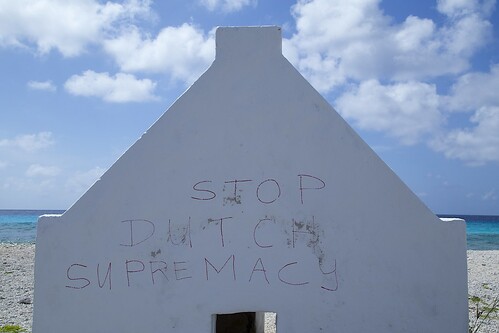 A slave hut near the salt flats on Bonaire. These little huts were used to give shelter to the slaves who worked the salt flats from the 1600s to the 1800s. The proper homes of the slaves were in the village of Rincon – about 35kms distant – from where they would walk to and from work. Many of the slaves were blinded within a few years. I wonder if any of them thought of just walking into the ocean and swimming back to Africa.

The hut in this picture had some graffiti added the previous night – ‘STOP DUTCH SUPREMACY.’ Many of the huts had been similarly defaced by members of this small but vocal protest movement on the island.